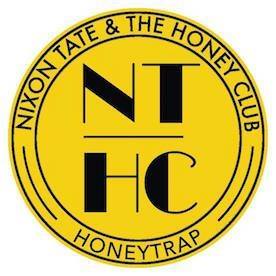 They’re back. Nixon Tate & The Honey Club have dropped their fourth single and it’s possibly the best one yet.

‘Honeytrap’ is dark, dirty and damn fine and it will be swirling around your head until they release the next one. Beginning rather tamely with a stripped back sound, ‘Honeytrap’ makes you feel instantly unsettled. When the band kicks in, it’s clear that this is more than just four and a half minutes of music; it’s the story of a man’s final night alive and the events that take place in those hours.

As the track takes off and picks up pace, it builds both musically and lyrically, gathering speed, power and an absolute load of passion. My favourite part of ‘Honeytrap’ arrives around the halfway point, when the guitar is finally freed from the reigns that pin it down. It flies around the track, leaving a trail of fuzzy electric sounds to land perfectly onto the smooth bass line and drum beat, which bring everything back down to solid ground for jut a few moments.

It doesn’t last long though and just like that, you’re sky high again, with NT’s signature vocals rippling around the whole track until the very end.

‘Honeytrap’ is yet another contrasting song in NTHC’s current run of singles. It’s most definitely the darkest of the bunch, one of their strongest live and by far one of the best singles to be released in the last month.

This site uses Akismet to reduce spam. Learn how your comment data is processed.